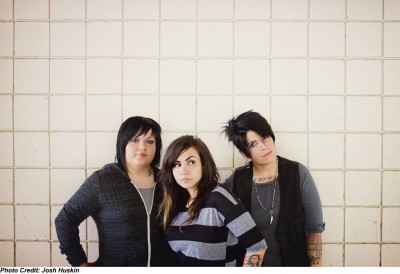 San Antonio-based rock trio Girl In A Coma are set to hit the road for their first national headlining tour this fall, with The Coathangers and Fences coming along for the ride.

While the upcoming tour is the group’s first time as a headline act, they’re no novices to the road, touring with Morrissey, Sia, Tegan and Sara, The Pogues, Amanda Palmer and rock legend Joan Jett, who signed the band to her Blackheart Records label, on past outings.

The tour is in support of Girl In A Coma’s fourth album Exits and All The Rest, slated for release on November 1.  The album was created during an intense period for the band, from playing shows with their idols to experiencing Arizona’s immigration law firsthand, the latter expressed in the pop-punk assault of “Hope.”  Other album cuts like “Adjust” spin tales of persecution laced with aggressive guitar attacks, while “Smart” shows the trio is adept at making propulsive, melodic pop.

Get a taste of the album by listening to “Smart” HERE. View Girl In A Coma’s tour dates below.