Artist Profile: Sleeping In The Aviary 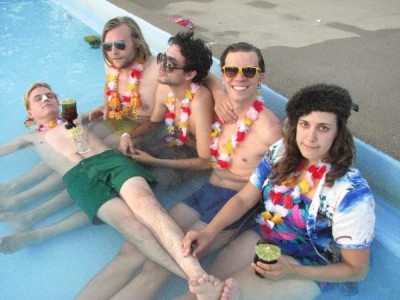 Combining the sweet sounds of  doo-wop with the crunch of distorted guitars sounds like a recipe for disaster, but somehow Minneapolis-based band Sleeping In The Aviary make it work, melding juke box melodies with alt-rock aggression and angst-ridden lyrics about heartbreak.

Sleeping in the Aviary’s vocalist/guitarist Elliott Kozel sums up the sound of the band’s latest release You And Me Ghost, best.

“It’s got a fuzzed-out doo-wop feeling, and all the songs are about girls!” “It’s like Dion and the Belmonts with a hangover trying to figure out how to use a Big Muff pedal, or the Everly Brothers beating up some kid in the bathroom of a high-school gymnasium and then feeling bad about it later.”

The group was a originally a trio when it formed in Madison, Wis, but overtime has evolved into a quintet that includes bassist Phil Mahlstadt,  drummer/backing vocalist Michael Sienkowski, keyboardist/accordion player/musical saw Celeste Heule and guitarist Kyle Sobczak.

All of the members spent years playing in numerous bands and side projects, experiences that have allowed to constantly change their sound, from the power chord heavy pop punk of their 2007 debut Oh This Old Thing?, the indie-acoustic folk of 2008′s  Expensive Vomit In A Cheap Hotel to the soulful-pop of last year’s Great Vacation. Now with the new album, released today, Sleeping In The Aviary seem to be looking back to the time of poodle skirts, Motown and American Bandstand.

“The ‘golden oldies’ from the ‘50s and ‘60s had a major conceptual influence on this particular album,” says Kozel. “The simple romantic themes and short and straightforward song structures were elements we attempted to steal from it.” Writing lyrics that also reflected that era’s obsession with love and loss wasn’t difficult since the songwriting followed the end of a long-term relationship for Kozel.  “It’s the old tried and true ‘break-up album,” he says.

Recorded over five days during a short break from touring, You and Me, Ghost was helmed by Kozel and Sobczak, along with help from engineer Ricky Riemer. The band will be going back on the road in September, releasing video teasers and new tracks from the album, starting with “Someone Loves You,” a tale of unrequited love set to chugging guitars, and “Talking Out Of Turn,” which marries classic doo-wop backing vocals and 50′s rhythms with angular guitars. Listen to them HERE and HERE. View the band’s tour dates below.