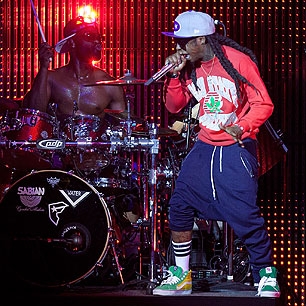 On Sunday a remix of Lil Wayne’s  “She Will,” featuring Drake and a newly minted verse from Rick Ross hit the web, further whipping up anticipation for the MC’s album Tha Carter IV. Fellow rapper, David Banner, who also worked the boards as a producer on the album, shared a few details about the new material with Rolling Stone.

“Hopefully we got the next single. It’s definitely for the club, it’s beating. It’s a bit different than the approach most producers have taken to club music, because I think a lot of producers try to stay safe and do what everyone else is doing. I don’t think Wayne accepted that at all,” Banner said.

Banner, who produced the track “La La” on Wayne’s last album Tha Carter III, says he respects the rapper’s tenacity in the studio, as well as his willingness to experiment musically.

“Lyrically, he’s a beast, and he’s allowed himself to grow,” Banner said. “A lot of music is stagnant right now, but I think the way he reels people back in is that his songs are banging. The beats are so big that it doesn’t matter what the acoustic guitar or keyboards are doing, because when the drums come in, he brings it right back home.”

“I don’t think any two songs on Wayne’s album sound alike,” he added. “For the most part, every song has its own place. I think they’re all going to have their own personalities.”