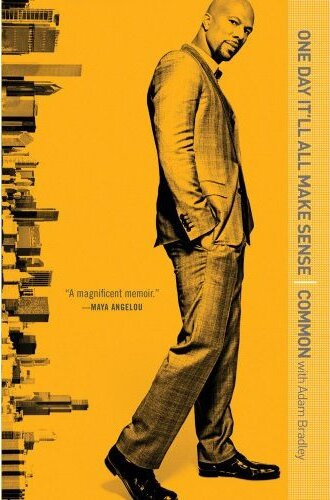 Common will be releasing an autobiography entitled One Day It”ll All Make Sense next month.

The veteran rapper’s memoirs, set to hit book shelves September 13,  were written in collaboration with author Adam Bradley. The book is being distributed by Atria Books and is currently available for pre-order on Amazon.com. Read the synopsis below.

In One Day It’ll All Make Sense, Common holds nothing back. He tells what it was like for a boy with big dreams growing up on the South Side of Chicago. He reveals how he almost quit rapping after his first album, Can I Borrow a Dollar?, sold only two thousand copies. He recounts his rise to stardom, giving a behind-the-scenes look into the recording studios, concerts, movie sets, and after-parties of a hip-hop celebrity and movie star. He reflects on his controversial invitation to perform at the White House, a story that grabbed international headlines. And he talks about the challenges of balancing fame, love, and fatherhood.

Each chapter begins with a letter from Common addressed to an important person in his life—from his daughter to his close friend and collaborator Kanye West, from his former love Erykah Badu to you, the reader. Through it all, Common emerges as a man in full. Rapper. Actor. Activist. But also father, son, and friend. Common’s story offers a living example of how, no matter what you’ve gone through, one day it’ll all make sense.”