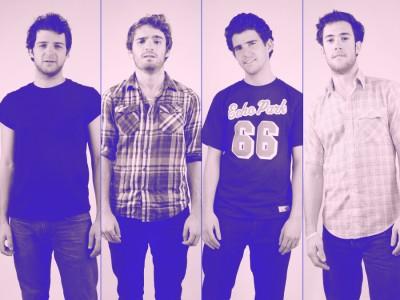 Y LUV have only been together a few years, but have made quite a few waves outside of the Los Angeles music scene from which they sprang. Formed by four friends while attending USC, the band has spit out three EPs–2009′s Nothing Matters and So I Play, and last year’s How Chill Can You Let Go–that have garnered comparisons to Arctic Monkeys, The Killers and Bloc Party.

In a short Q&A with Indies and The Underground, the band talks about their early influences, how the group came together, why comparisons to some of the aforementioned bands are “flifling” and attempt to explain how bassist Luke Hanna is like a muppet.

Where did the name Y LUV come from?

Freddy: The name comes from the symbol which I drew in high school while doodling in class. I called it the Y LUV symbol and my parents were like “Hey, that’d be a good band name.” And then I had a band.

How did the band come together?

Luke: Fate
Sam: That’s a great question, I appreciate you asking it.  I was asked to slap the bass around, then a year later, I upgraded to lead guitar.
Freddy: Sam and I grew up together and when we came to USC we were looking for mates to become bandmates. We found Marcello first. Then Luke. Then ourselves.

What were your early musical/songwriting influences?

Freddy: Bands like Pepper, Weezer and Blink 182 ruled my early high school years so I’ve got to imagine that’s where a lot of influence for our earlier stuff came from. Because even though I was really into bands like Bloc Party and Arctic Monkeys when we started playing together a few years ago, their influence didn’t show much just yet.

Luke: Monkeys have been known to beat on hollow logs and imitate birds, so I’d say those and other protohuman orchestrations are probably the earliest direct influences. Also, The Guess Who.
Sam: John Mellencamp and Jackson Browne.  Bonnie Raitt’s “I can’t make you love me”
What was it about those artists that stuck out to you?
Freddy: I guess a uniting factor between those groups is the energy they bring to their music, and at the different times in my life when I loved each of them, our energies just . . . were on the same level.

Luke: I’d say the monkey thing is pretty submerged within our subconscious….so couldn’t tell you….or maybe that’s what’s appealing about it.
Sam: Cherry Bomb blows my mind, the music video is him playing a slide guitar on the beach.  I mean what else do you want.

What was the first CD you bought and are you proud or embarassed you bought it now?

Freddy: I don’t remember the first CD, but the first tape I bought was Tragic Kingdom by No Doubt. I’m proud sure. I still think Gwen Stefani’s voice is super good and distinctive and weird.
Luke: Black Sabbath – Paranoid. I’m proudly paranoid about the situation.
Sam: Third Eye Blind – Self Titled. Embarrassed that I still have a crush on the singer.
Marcello:  Spice Girls – Spice World - I still love their harmonies. Proud.

How is your latest EP How Chill Can You Let Go different sonically/lyrically from previous releases Nothing Matters and So I Play?

Luke: The role of psychedelics
Sam:  We used some different sound waves after learning about string theory.

Your sound has drawn comparisons to bands like Arctic Monkeys, Bloc Party, The Killers and Kings of Leon. Do you find these comparisons flattering or stifling (i.e. fans/critics trying to put you in a box)?

Luke: I find them a little of both and therefore flifling.
Sam: Does corn put corn pops in a box?  Depends how you go about that one, I’ll get back to you on that.

ZHU’s remix of “All Night” takes the track in a more club-oriented, dance style. Would the band be interested in doing something similar on your next release?
Sam: Dancing is the best thing a human can do.

How does the band usually come up with songs/production ideas?

Luke: Psychedelics
Sam: We try to act as relays for the universe, really just let the energy run through us at band practice.  That turns into waves, sound waves.

What are your top three favorite songs on the radio right now?

Luke: All I’m getting is a bunch of commercials…ask me again in like an hour.
Sam: Night Moves. I heard them play “Ambitionz Az a Rider” on 93.5 this morning while I was in the shower.  Couldn’t have asked for more.
Marcello: I don’t know the song names or what they’re saying but anything on the spanish speaking channels.

Sam: Im just gonna step in here.  He’s actually a puppet (figuratively), in that we manipulate him in whatever way we want ;).
Luke: I actually feel that this is a question we should all be asking ourselves right now. Several dimensions of extraneous forces are controlling our actions at very inscrutable levels and so, the question really assess the extent of which our own assiduity in regards to these forces is significant. To answer this question, one would have to elucubrate Muppet self-awareness…are Muppets aware that they are simply characters in a extremely conditioned world controlled by puppeteers and how vital is that level of self-awareness in their own definition. Is one still a member of society if that individual reacts knowingly to the extrinsic forces from government and media outlets, or even knowingly chooses not to react? You see…one could be caught in a catch-22 in answering this question for admitting to be muppet-like may or may not be muppet-like. My question to you then is “Does it matter?” Floyd Pepper, in The Muppet Movie, may have answered it best by responding to the question, “What’s happening?” with “At the moment, we’re what’s happening?”

What can fans expect next from Y LUV?

Luke: The future of Y LUV is a good bet.
Sam:  Raw, yet refined energy at the live shows.
Freddy: A wondrous journey down the panda hole . . . and two new tunes.