My Morning Jacket Premiere “Holding On To Black Metal” Video 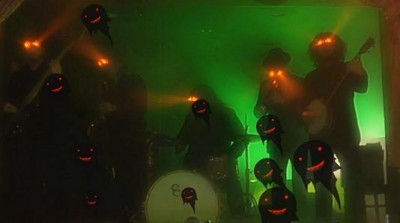 My Morning Jacket have launched a YouTube takeover, plastering four of the their clips on the site’s homepage, including the surreal clip (complete with Pac Man-esque ghosts) for their latest single “Holding On To Black Metal.”

The band gave an early preview of the video last night when several members posted it on their Google + accounts, making the clip one of the first music videos to premiere on the new social network. Fans can also check out a special preview of the video on Saturday, August 6 at 8pm EDT, during the band’s live performance at Lollapalooza.

The “Black Metal” video was shot during the hectic period before the release of the group’s latest album Circuital, while the band was getting ready for their hometown show, filmed by Todd Haynes as part of American Express’s Unstaged series. The band chose to keep things local for the video, working with the Louisville-based Sole Solution Studio for the clip, and filmed it at local watering hole Jim Porter’s Good Time Emporium.  The video also includes footage from their electrifying 2011 Bonnaroo performance.

My Morning Jacket kick off the next leg of their US tour tonight in St. Louis and will play select dates with Neko Case as the opener during August. View the tour dates and the video for “Holding On To Black Metal” below.