Le Tigre Documentary Out On DVD 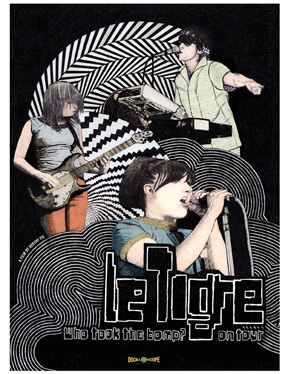 The highly anticipated documentary Who Took The Bontemp? Le Tigre On Tour has finally been released on DVD. The critically-acclaimed film follows electronic feminist icons Le Tigre, led by Bikini Kill’s Kathleen Hanna, on the This Island tour across four continents and ten countries.

Directed by Kerthy Fix, the film shows the band confronting sexism and homophobia in the music industry while simultaneously ripping up the stage with witty, blunt lyrics and performance art theatrics. Who Took The Bontemp also contains never-bef0re-seen live performances, archival interviews and backstage footage.

The film had its first screening last night at the Maysles Cinema in New York, an included a Q&A with Fix, Hanna and Johanna Fateman. Head over to AOL Spinner for an in-depth interview with Kathleen Hanna. Watch a live performance of “Deceptacon” from the documentary and view the rest of the screening dates below.