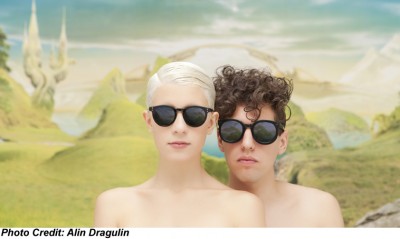 Indie pop duo YACHT have released “Utopia” an arty dance cut that serves as a flip side to the apocalyptic synth-pop of “Dystopia (The Earth Is On Fire).”

Propelled by revved up, dueling guitars and frantic, disco-style bass line, the track is layered with multiple keyboards, and drums, while Jona Bechtolt and Claire L. Evans intertwine their vocals to create celestial sounding, androgynous harmonies.  The 180 from their previous release is also evident in the lyrics, with the duo belting out lines like “there’s nothing in the future / it’s up to us to make utopia.”

YACHT will be joining bands like Guided by Voices, Wavves, Atlas Sound, and more as part of Brooklyn’s Northside Festival.  YACHT’s show will be at Music Hall of Williamsburg with Midnight Magic, The Miracles Club, and DFA DJ’s on Sunday,  June 19. Their album Shangri-La comes out on June 21. Listen to “Utopia”  below.