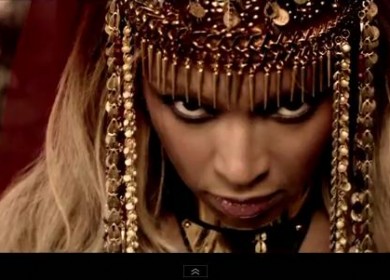 Bey season is officially upon us. After weeks of teaser clips, the video for the superstar’s new single “Run The World (Girls)” premiered Wednesday night during American Idol. The Beyonce in Francis Lawrence-directed clip is miles away from the preening, glamazon previously captured in videos for past hits like “Crazy In Love,” “Diva” and “Single Ladies.”

Clad alternately in African-inspired avant garde garb and post-apocalyptic couture and rocking  bleach blond eyebrows, the singer stomps through the tribal-inspired choreography. And while the pop diva’s sexuality is still front and center, this time it comes off as more aggressive provocation than sultry seduction. She even flips off the camera at one point. Forget “Ring The Alarm.” The lioness prowling in this clip looks like she’ll wring a guy’s neck if he even thinks about disrespecting her or any of the other Amazons.

However, for all its good feminist intentions, “Run The World” is one of the star’s weaker singles. In trying to keep up with the song’s manic tempo, Beyonce’s vocal delivery comes off as rushed, while her lyrics lack focus, veering wildly from meditations on female power to proclamations of diva bravado that feel empty and sound out of place. One minute she’s talking about building a nation, the next it’s “f*ck you, pay me.” While it may not measure up to previous monster hits in terms of musicality and pop appeal, the video is a definite visual milestone for Beyonce, and gives the track new life. She acknowledged the sudden shift in her music when talking to Billboard.com.

“It’s definitely riskier than something a bit more…simple. I just heard the track and loved that it was so different: it felt a bit African, a bit electronic and futuristic. It reminded me of what I love, which is mixing different cultures and eras — things that typically don’t go together — to create a new sound. I can never be safe; I always try and go against the grain. As soon as I accomplish one thing, I just set a higher goal. That’s how I’ve gotten to where I am,” she said.

Watch the video below.