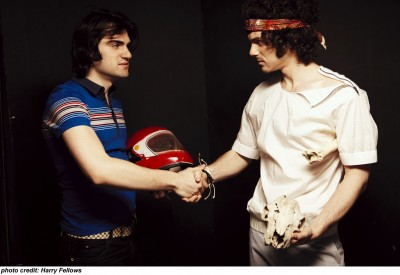 Brooklyn-born brothers Robert and David Perlick-Molinian, otherwise known as electro duo French Horn Rebellion, are set to self-release their debut The Infinite Music Of French Horn Rebellion, on May 24. Written, produced and mixed by Robert and David, Infinite Music is a concept album of sorts, a intergalactic narrative about the physical and emotional journey of an unknown French horn player.

“There is a story running through the album, it’s about the Universe. We’re pretty clear on what the story is, but what you take away from it may be something entirely different,”says David.

To celebrate the album’s release, the band will be headlining  a record release show in Brooklyn at Grasslands Gallery. Savoir Adore and Golden Pony are expected to be the opening acts. French Horn Rebellion have also released Golden Pony’s remix of their track “What I Want” for free download. Listen to it here. The group is currently wrapping up a US tour with Yelle.