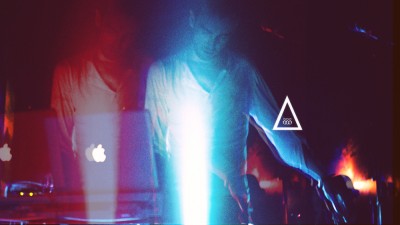 “If you didn’t have standard pop music as a reference, what would your pop music sound like?”

That was the question Johnathan Bates, the force behind electro pop experiment Big Black Delta, asked himself after leaving his former band Mellowdrone. Bates’ penchant for throwing caution to the wind seems to have taken root in his childhood. Born in Venezuela, he moved to Miami at the age of seven before heading to Boston to attend Berklee College of Music.

After dropping out, he traveled west to Los Angeles, couch surfing until he formed Mellowdrone, putting a couple of EPs independently and recording an album for Columbia Records. However, he soon tired of the conventional band format and struck out on his own, Big Black Delta (also known as BBD for short)being the latest manifestation of his restless personality.

Indies And The Underground chatted with Bates about early musical influences,  his days as a vagabond in LA, how Bel Biv Devoe isn’t the only thing that pops up when you google Big Black Delta and his unique (yeah that’s the right word)  perspective on the creative process.

What is your earliest musical memory?

Dad playing a Menudo song on a spanish guitar in Caracas.

What were your early musical/songwriting/singing influences?

First tape was Thriller.  When we moved to the US, I somehow ended up with Van Halen’s 5150 record.  Then it was Peter Gabriel.  Then it became solely metal for many years.

What impact did they have on you?

Actually alot.  I find Quincy Jones’ horn call and responses to influence me heavily.  Most of my bass lines reflect Michael Anthony’s one note vibe.  I love the how much space Peter Gabriel’s music has and try to do that daily.

You went to Berklee College Of Music briefly. What influence did that have on your music?
I went in as a shredder/prog guitar player that wanted to play in Testament.  The constant bad weather kept me inside where I moved to learning what made songs tick.  Any kind of song.  I guess Boston did that more than Berklee.  Made some friends there and I learned a few tricks.
After you left school and arrived in LA, you crashed on a lot of couches. Were there any low points when you thought “Maybe I shouldn’t pursue music/I should go back to school?”
Ha!  This question reminds me of when you’re at a party and someone asks you “how you doing?” Do you REALLY tell them how youre doing, because it could potentially trip everyone out.  There were many low points. Living in dining rooms, living rooms, bushes, etc… Playing ALOT of shitty shows, to empty bars and doped out promoters.  Not eating.  The flip side being, it was still fun and I’ve seen and experienced shit that I didnt even have the balls to dream of at the time.
How does Big Black Delta’s music differ from your previous band Mellowdrone?

Mellowdrone started off as me, but became 3 guys who worked equally as hard at the same goal  We became so close that we could go months to years without seeing each other, and pick up right where we’ve left off.  So the music reflected that.

Big Black Delta is just me, at my most private.

Why did you feel the need to take a break from the band aesthetic?
The making of Mellowdrone’s last record really took it out of all of us.  Plus, I wanted to try and feel what its like not to have to hold an instrument the entire time. Naked time.
You’ve said your approach to BBD is to imagine what pop music would sound like if you didn’t use standard pop music as a reference. Do you think that hurts a lot of artists’ creativity? How so?
A standard can only hurt your creativity if you let it.  Through much failure, I’m learning how to ride on just first instinct.  Not think too much. Man, if youve never tried to write a song, I sound like the dad with the earrings in My Two Dads.
What is your creative process usually like?
Like a good dick joke. I’ll let you interpret that as you will.
Since the majority of BBD’s sound is computer/electronic based, how do you go about making sure everything comes together in a live setting?
With my laptop and programs like Logic and Ableton, it’s not that hard.  Most importantly I have Mahsa Zargaran and Amy Wood playing drums.  They’re two close friends who happen to be astonishing musicians. You should try standing in front of them while they play.  It is quite exhilarating.
On a completely unrelated, humorous note, do people ever confuse Big Black Delta’s initials (BBD) with Bel Biv Devoe?
Totally. If you google Big Black Delta, some rad UFO stuff will come up, but also everything from black sororities to airline mishap stories to pornography.  Just a typical Tuesday.
What can fans expect from your full-length debut?
A Nyquilish buzz and a mustache ride.