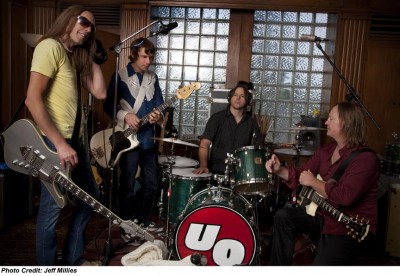 “I’m so excited that Urge is back. I’ve been listening to their new record, and they sound as fresh, innovative and unique as ever,” the Smashing Pumpkins frontman said.

The positive response to the album’s first single “Effigy” is also a good indicator that the band was missed, while the newest single “Mason/Dixon” fueled by the sleazy power chords and the harmonies of duel frontmen Nash Kato and Eddie Roeser, should further cement their comeback. The band will also be hitting the road for a string of U.S. gigs this month. But if they skip your city, don’t worry–the band will record their LA show and sell it via instantly download cards and USBs.

And following in the footsteps of fellow nineties rockers Radiohead, Urge Overkill will be selling Rock&Roll Submarine with a “pay what you want” model for the next 48 hours, in a partnership with Groupees., with two dollars as the minimum,amount. Ten percent of all donations will go to MusiCares. Click here to take advantage. Listen to “Mason/Dixon” and view a few of the group’s tour dates below.