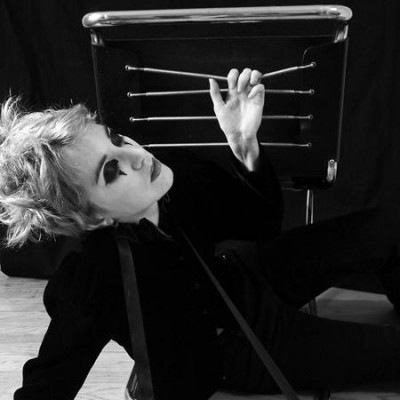 Since her debut release Jump Of Flame in 2004, Canadian avant garde folk/blues chantuese Clara Engel has created seven albums and EPs  packed with kind of uncomfortable feelings that are usually only spoken through tears and clenched teeth, while displaying a lyrical prowess that borders on poetic.

In an interview with Indies And The Underground, Engel chats about her lyrical inspirations, new music, covering herself in newspaper clippings, and the smash-your-room appeal of Adele’s music.

I used to sing folk songs with my dad when I was about three or four, and he would play the guitar. That’s my earliest tangible musical memory.

At what moment did you know you wanted to be a singer?

Being a singer didn’t seem within the realm of possibility when I was a growing up. It was not something that people in my family were expected to become. Also, I failed singing in grade-school. I had a rough time in school, didn’t fit into any clique, and felt particularly unlike the girls who wanted to be singers and actresses. At home I drew and wrote a lot, and had a rich imaginative life. I do remember feeling very intense longing and envy a few times while watching school musical productions, and sitting frozen in the audience. I learned to play guitar and started singing and writing songs when I was thirteen, and it became an absolute commitment pretty much immediately. I didn’t know I wanted to be a singer, I just started to become one. Finding a voice, learning to sing – that process was (and is) like externalizing my inner world, turning everything inside out. It’s probably why I always sing with my eyes closed. So I guess I started to become a singer when I was thirteen, but it was more like I was possessed with a desire that could not be contained than having a conscious choice or plan that I deliberated.

Your singing style is reminiscent of artists like PJ Harvey or Patti Smith. Did they have an impact on you and if so, how?

I think that my singing style is really different from both of them, and that they are really different from each other. They are both amazing, and in such singular ways. My singing style is more of a product of trying to find an authentic and unaffected place to sing from, while at the same time listening to and falling in love with singers I could never hope to imitate. I can’t sing like Howlin’ Wolf, Amalia Rodrigues, like Warren Ellis’ violin, or like a cantor or a counter-tenor, but I’ve fallen in love with these voices, and they’ve left a mark on the way I sing. Being compared to those two artists is a real compliment though, because they both do exactly what they want, they both continue to explore and change, and don’t pander to or compromise for anyone. But that makes them unique, so I wouldn’t want to be ‘like’ either of them, if you see what I’m saying.

Who were your other musical/songwriting influences growing up?

What about them influenced you?

They move me in a way that I can’t articulate. They make music that draws emotion to the breaking point sometimes. I could never explain it.

I don’t know. Depends on the person. I love Missy Elliot. I love Depeche Mode. I love The Ark! I don’t just listen to sombre music. Some people are surprised by that. One day I will make a dance record, I swear.

It was in eighth grade. I wore all black and covered myself with pieces of newspaper and read a poem I had written, through a megaphone. I think the whole school was there, and I’m pretty sure no one could understand the words because the megaphone was really shitty, and I didn’t enunciate clearly enough. I was kind of devastated because I was really proud of that poem. It was bizarre and anticlimactic.

Your songs can be very intense and personal. Can that make them difficult to sing live?

No. I would have more trouble singing in a distant or disengaged manner. In art, mincing along on the surface of things depresses, bores, and alienates me. In my work, heightened emotion is something I call upon and seek out. Everyone has feelings, everyone has mortality, fear, needs love, etc. It’s just not always fashionable to sing about those things sincerely, without irony, self-consciousness, a thick stylistic padding, or some other distancing factor. I’m part of an old tradition in that way. There’s nothing innovative about heartfelt emotion. I do believe in some sort of catharsis that happens through song. When I’m really present and singing live, there’s nothing that I love more.

Songs like “Accompanied By Dreams” and “Trembling Dust” incorporate a lot of metaphors and visual imagery, and read more like poems than pop songs. Are you inspired by books, poetry, art, etc.?

Yeah, I use all of my senses in my creative process. (Except, maybe, my sense of smell.) I read a fair bit. Mostly poetry and non-fiction at this point in time. It’s all connected, the connections build themselves, it’s a spiderweb. I’m surprised when I look back and I realize all the disparate points a song has launched itself from to make the whole.

How does the songwriting/production process usually happen for you?

Mysteriously. It requires patience, a lot of writing stuff down, and going over melody lines in my head, crossing things out, and detuning and retuning my guitar. I don’t analyze my process much. There’s an analogy that Jeremy Reed used in one of his books, about a singer protecting his creative spark, or mojo, or whatever it is, as if it were a flame. I don’t remember the details, but it stayed with me. It makes me think that this whole rock-and-roll-lifestyle thing, (tongue firmly in cheek), is like a balancing act between letting my light shine and protecting it from the winds. A creative performer puts herself in a radically vulnerable position, but it’s such a powerful position at the same time. It’s a real balancing act. Aside: I love Jeremy Reed and I consider him a kindred spirit. Everyone should check out his project with Itchy Ear called The Ginger Light. I’m really quite solitary and private when I’m actually creating and I have found over-analysis is antithetical and toxic to my process.

What are your favorite songs on the radio right now?

I like Adele’s song ‘Rolling in the Deep. It’s a lovely song. It makes me want to joyfully smash something in a beautiful way, like in the movies where you don’t have to worry about stepping in the shards afterwards. I haven’t been listening to the radio much lately though.

What can fans expect next from you?

I have a new album’s worth of songs that I haven’t recorded yet. I even have a title ready for it, and then I looked it up online and found out there is a film from 1914 and a painting from 1875 by the same name. I won’t give it away just yet. I’m working with a drummer and a saxophone player, and a cellist might be joining us soon. It’s a matter of scraping together enough money to record in the next few months. If people want to help out they can pre-order on Kapipal. I’ll be posting updates on all my online presences as it comes together. I’ll keep everyone posted!