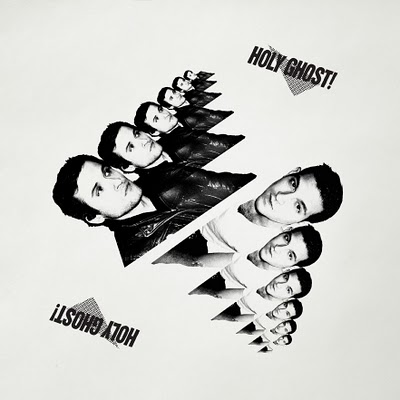 Holy Ghost! first piqued the ears of audiophiles with “Do It Again,” a first-class slice of sonic wizardry crammed with shimmering synths, a ferocious bassline and beats all topped off by an “oh oh oh’s” that could only be described as deliriously psychotic baby laughter.

The duo provide plenty of heading spinning tricks on other tracks. “It’s Not Over” and the ironically titled “Slow Motion” practically spill over with stacks of  booming tom tom drums, frenetic keyboards and at one point, an oddly poignant brass solo. “Static On The Wire,” features an elastic bass, smooth falsetto vocals, warm chords and fiery guitar solo, provides a sleek, sultry groove ideal for late nights, and the breathy “Say My Name” give offs a cool, laid back vibe.

But the album’s focus turns consistently to pop melodies and more traditional song structure. This was a wise choice, as pulling back the production theatrics leaves room to concentrate on the lyrics, which focus on themes of love, betrayal and loss. “Well you promised/To be honest with me/Were you being honest/Tell me honestly,” singer Alex Frankel pleads in “Wait and See.” Backed by heavy synthesizers and a slowing pumping bass, the track rides a twinkling melody that echoes in the guitars, samples and keyboards and builds into a giant, Phil Specter-esque melodic sound wall.

Dripping with early 80′s new wave sheen, clean, angular guitars and all, “Hold My Breath” mines the same paranoid territory, with Frankel repeating “Took some money from the joint account/I know I know I know I’m runnin’ out but/I found a woman in a photograph/Good guess, good guess, good guess.” The emotional “Jam For Jerry” laments the untimely death of the band’s drummer. “It surrounds me/Drowns me in it/If I change it all I would/If only I could,” he sings mournfully.

If any track seems to meld Holy Ghost!’s pop ambitions with sheer sonic audacity, it’s album closer “Some Children.” Somber chorus harmonies weave in and out over a bouncy, grooving bassline, while jittery synths flutter by and rise and fall from the shadows. All while Michael McDonald serves as guest star vocalist….oh yeah, that Michael McDonald. The song manages to be cutting edge, catchy, joyously danceable and beautifully melancholic all at once.

Holy Ghost! is a frighteningly hooky, compulsively listenable debut that dares you not to bust a move.