Ever since the release of their debut single “Hold On” four years ago, electro duo Holy Ghost!, made up of childhood friends Alex Frankel and Nick Milhiser have gone from strength to strength, releasing another memorable cut, “I Will Come Back,” in 2009 and dropped the critically-acclaimed Static On The Wire EP last year. 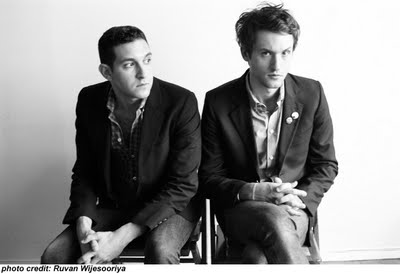 Holy Ghost! chatted about their early musical incarnation as hip hop band Automato, remixing Michael Jackson and Fleetwood Mac, and how they lured in Michael McDonald.

While the name Holy Ghost! comes from a song by Bar Keys, did either of you grow up in a religious home?

Not so much…I’m Jewish and Nick is not, but by virtue of the fact that we’re both from the Upper West Side of NYC we’re both basically Jewish.

What were your early musical/songwriting influences?

You were in a hip hop band called Automato in your teen years. How is Holy Ghost! different from your previous band?

Both of you are classically trained musicians as well as DJs. How has that affected your approach to making music?

We’re not classically trained but we did take lessons growing up and taught ourselves a bunch of stuff. I don’t what it would be like to make music without knowing how to play anything at all. Certainly people do it all the time with excellent results. And I imagine a lot of creativity comes from having no rules. But I guess I like to be able to sit at the piano when we’re writing and kind of just go without thinking to much about what follows what…I guess a little bit of training helps allow yourself to just play and see what comes out instead of being stuck before you start. But I don’t know. There’s no right way. It certainly helps that Nick is a drummer for dance music.

Which mainstream hits would you love to remix?

Eeek, I’d rather not touch the things I really like. Having the stems to the Michael Jackson catalogue would be pretty sweet though…or Fleetwood Mac!

Holy Ghost! sounds like a modern take on the late 70′s/early 80′s new wave, R&B and disco sounds of bands like Chic, Duran Duran, Depeche Mode, Modern English, The Cars and Let’s Dance-era David Bowie, as well as Prince and Michael Jackson. Did you have those or other artists in mind while recording the album?

I think everyone who enjoys life has those songs and artists in their minds.

How were you able to get Michael McDonald to guest on “Some Children?”

Strangely he just wanted a back rub. No, through a friend of a friend.

Although it’s upbeat musically, lyrically the album sometimes touches on some pretty emotional territory, like “Jam For Jerry,” a song about the death of your drummer, and songs like “Hold My Breath,” “Wait and See” and “Static On The Walls.” Was it a conscious decision to have the contrast with the sound and lyrics?

Definitely on “Jam For Jerry” we had the idea. “What about a song that pays tribute to a somber subject lyrically but in an uplifting way musically.”

You stated that you wanted to make an album that people would want to play both at a club and at home. Do you feel that’s a barrier that  a lot of dance artists face?

Of course, and hurdle many stumble over. Hopefully we cleared it.

You guys, along with other bands like Cut Copy, Sleigh Bells and MGMT, blur the lines between electronic dance music, pop and rock music. Do you see yourselves as part of a movemnt or a creating a new style of pop music?

Hmm, I don’t think we really think like that nor are we in a position to judge where we fit in. I do feel a certain sense of kinship with Cut Copy because they are good friends.

What can fans expect next from you?

Not sure yet, but it’ll probably have to do with more music.